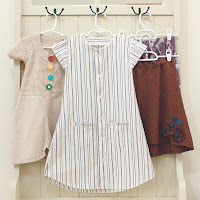 If you remember this post, I promised to show and tell (mostly show) my ideas on revamping my Little Gal's wardrobe.
Well, she acquired a few new clothing items over the weekend! I wouldn't say they were "free", because it did take time. But she now has some fun little pieces to wear and feel cute in!
This idea was a little CRAZY, and that is definitely what drew me to it.
I have seen in so many places making dresses and skirts out of adult clothing. Mostly on Etsy. This was in Martha Stewart Living magazine!
If Martha did it...shouldn't I at least try?
In Martha's tutorial in the magazine there was a picture similar to this one below. I didn't read the instructions before I just did it myself, but I am a rebel sewer. I rarely use a pattern, and if I did I probably wouldn't follow the directions. I know, I know... I'm naughty.
Martha has a pattern you can download (click "print pattern pieces" under step 1). If you are a little chicken of just cutting around a dress like I did, just use the pattern! 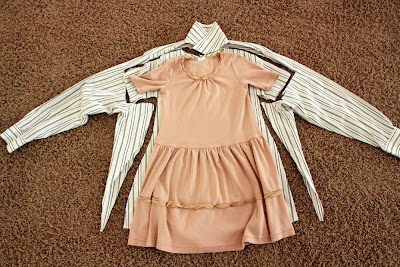 What do you think? Little Gal loved it.
And I didn't even have to sew any button holes! (I hate those).

I ended up going through my whole box of clothes meant for goodwill and found this old cardigan. Because of my man arms from lifting my cute kids, I never wore this. Plus it was missing a button and I have been lazy to find one that matches. So, I cut the armpits a little shorter and closer - shown in the picture below. 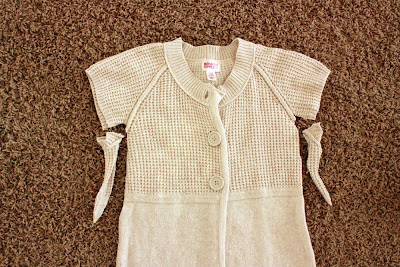 I took the buttons off, and sewed the front together. I also zigzagged over the button holes to close them up. We had to embellish something.
Little Gal chose the buttons herself!

This was a skirt from the goodwill box. Never did fit right. I cut off the top 4 inches of the skirt, and I re-used the elastic from the waist band that was there originally and just measured it around Little Gal's tummy! I chose the buttons for this one, and sewed them on top of frayed circles I cut from the top of the original skirt! :)

Little Gal's favorite color is purple, so this goodwill top was meant to be for her. It was a babydoll dress before, but too short on me. I cut off the top and made an elastic waist band the same size as the brown skirt. I used extra material from the top of the original dress to make some cute embellished flowers for the bottom. I am so obsessed with flowers right now.

It was so satisfying to make these for her using gently worn items. Go look through your closet! It is definitely easier to get rid of something you don't wear when you know someone you love could benefit from it. In addition to cleaning out your closet, you are being green!!!
How cool is that?
Cheers, 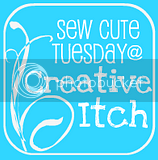 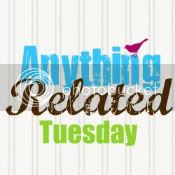 I LOVE IT!! I actually have a few thrift store items I bought, totally not my size but loved the pattern and wanted to use it for something for myself or my little ones. This is really cool, so do you see yourself doing this more for your kids or sticking to store bought?

Oh my goodness. Those are the coolest and look so easy to do. Thank you for sharing. I'm loving your blog. Thanks again.

Thanks Peterson Life! Yes, I actually see myself doing this more often, probably a mix of home made and store bought. :)

Darling ideas there! I love them. I have a bag of clothes sitting right here by my front door ready to head out to Good Will. My twins are a little older and bigger now that a mans shirt probably wouldnt work for a dress but it would work for a "painting" shirt to cover their clothes as they craft away!
Thanks for the ideas! You are brilliant!

The dress is so darling. I would never have thought of doing that!

Leisa!
What adorable ideas! way to go! thanks for the inspiration!
-wendy

what cute clothes! you did an incredible job up-cycling for your daughter!

Those are terrific! I love them all! I'm so glad you joined me for Anything Related!

Upcycling perfected! You did a wonderful job.

Inspired by you said...

Wow! What a great mom. I'm going to have to give some of this a try. Love it!

Great inspiration for some items in my stash. Thanks for sharing!

Fabulous! Found your tutorial on Pinterest and repinned! Thank you.

Why put Mod Podge on top of your photo canvas?
The Mod Podge acts not only as a glue but also as a sealer. It will protect your photo's and/or paper and give it a nice finish.
Fun Tip: Brush your Mod Podge onto your picture first horizontally and then when dry, reapply vertically to give your picture a "grid-like" canvas texture! 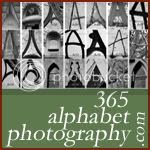 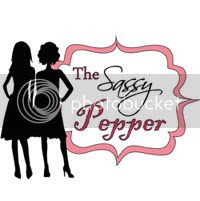